Home of homebrew electronics - solar, Raspberry Pi etc- Learn how to make stuff, or buy one - we encourage you to show us what you've made and then sell them

Its the weekend and I've been meaning to sort out the iPad charging for ages... so I'm currently playing with solar iPads...

I've been wanting to make a solar ipad cover for months, but Apple have some trickery to make it hard.

Apple uses sensing resistors on the usb data lines, and require tight voltage control. For solar this is an issue.

I started with 5v and 6v panels and of course the Apple devices wouldn't charge. So I moved on to putting in tracks on the panels and resistors. This helped, and my iPad started to charge. Nice

but I found that with 6v panels it was too high for the iPad, so I put in a 4xnimh battery pack to lower the voltage. This worked great, but is no good for a solar cover.

So I'm playing with voltages, resistors and diodes to get the combination right so I can charge the iPad with a simple cover.

Today I finally managed to get my solar cover moving. This is a 1200ma (or 1.2amp) panel bonded to a magnetic ipad cover. I think its the highest current solar cover by some margin. Its got the sensing resistors set to 1.2 amp to match the panel, but I think the voltage dipping is why it hit 850ma today, when I think it could go higher. I'll test tomorrow if the UK can manage some sun....

When tested today in early sun I saw 850ma into the ipad. I suspect it wont hit the full panel spec, but should see 900ma or maybe 1amp in better conditions than UK in late Oct.

I've now tested on the iPad1, and it charges nicely

but of course, the ipad doesn't accept the magnetic cover.

Finally I've tested the iPad3 and this has 'sticky' charging. If cloud covers the sun and lowers the charging rate it remembers this lower rate even if the sun comes out again and will charge at the lower rate. To remedy you need to unplug and replug back in to get the full rate again, or put up with lower rate. Shoud it ever go below 100ma it will go back up to 100ma as that seems to be a threshold. Below 820ma it will say 'not charging' but actually charges fine.

So for now , this is an iPad2 Cover

Size is the size of the ipad cover.
weight is 340g. When I finalise it, I'll be selling for $49 delivered anywhere but in the meantime I'll keep trying the various combinations to get the best from this.
Top

It all sounds exciting stuff I have an IPad 1 which I will bring around when I see you on the 11th. Keep up the good work!
Top

Great. It would be great to test it on an iPad1 - should charge very quick.
Top

Yet another of my long term projects finally got underway today. I make 2 panel solar chargers but I've been meaning to 'UP' the size of my folding solar panels for some time. Normally I make dual panels at 5.5w each, but this will be the first quad panel solution.

It will house 4 panels of 5.5w each (6v 920ma) offering either 2 USB ports of 1.8amps or 1 12v port of 1.8amps. I'll supply a USB nimh charger and a Li-ion charger to go with it as well as a 6 cell 18650 Energy storage box. This will be able to store about 70wh or energy (enough juice to run a 60watt light bulb for an hour) should make a nice 'disaster' solution. I'll post some other pictures as the build goes over the next week or so. At this stage the panels are in but not connected together. It looks huge currently but having done these before I know it will shrink by the time I've cut the fabric and sewn it all up. So far I think its OK but I have to admit to being nervous putting the back on. Previous ones have not always been easy. The possibilty of a 'wonky' back is not unknown!
Top

Well its Friday night. I've been busy on a few things. I've knocked out a few Nona cases on my BFB-3000 3D printer (see below) and I've been playing with my recently acquired sewing machine (Yes! don't laugh!) I've succesfully sewn through 2 sides of PVC backed fabric using a complicated embroidery pattern. I'm thinking it could help me make some pockets with a good pattern. For those interested I use a Brother SE-400 imported from the US due to the cost. Primarily I use it to create the 'Cottonpickers' name on the solar cover (see below) I'm keen to get a logo sorted and use it for that also in the future. Anyway, tonight was a success with the double layered fabric. Just need to work out how to incorporate it into the folder design...!!
Top

I've just completed a 2 amp folding solar panel. This one is a little different than normal as it includes a small fly-lead to allow direct Solar to NiMH charging.

I always supply a Li-ion and a NiMH charger with these folding panels, but these have electronics to look after the cells and in the case of the NiMH chargers, they charge at way less than these panels are capable of.

So this particular Solar solution includes a fly lead and an empty 4xAA NiMH battery box.

A second bonus, is that you can connect in this pack when charging iPads to allow you to give charging a really nice boost and maintain a very high charge rate even if it gets cloudy as the battery box will seemlessly take over. When the sun comes out and the iPad nears full charge the energy will be directed back in to the NiMH cells to charge them back up. 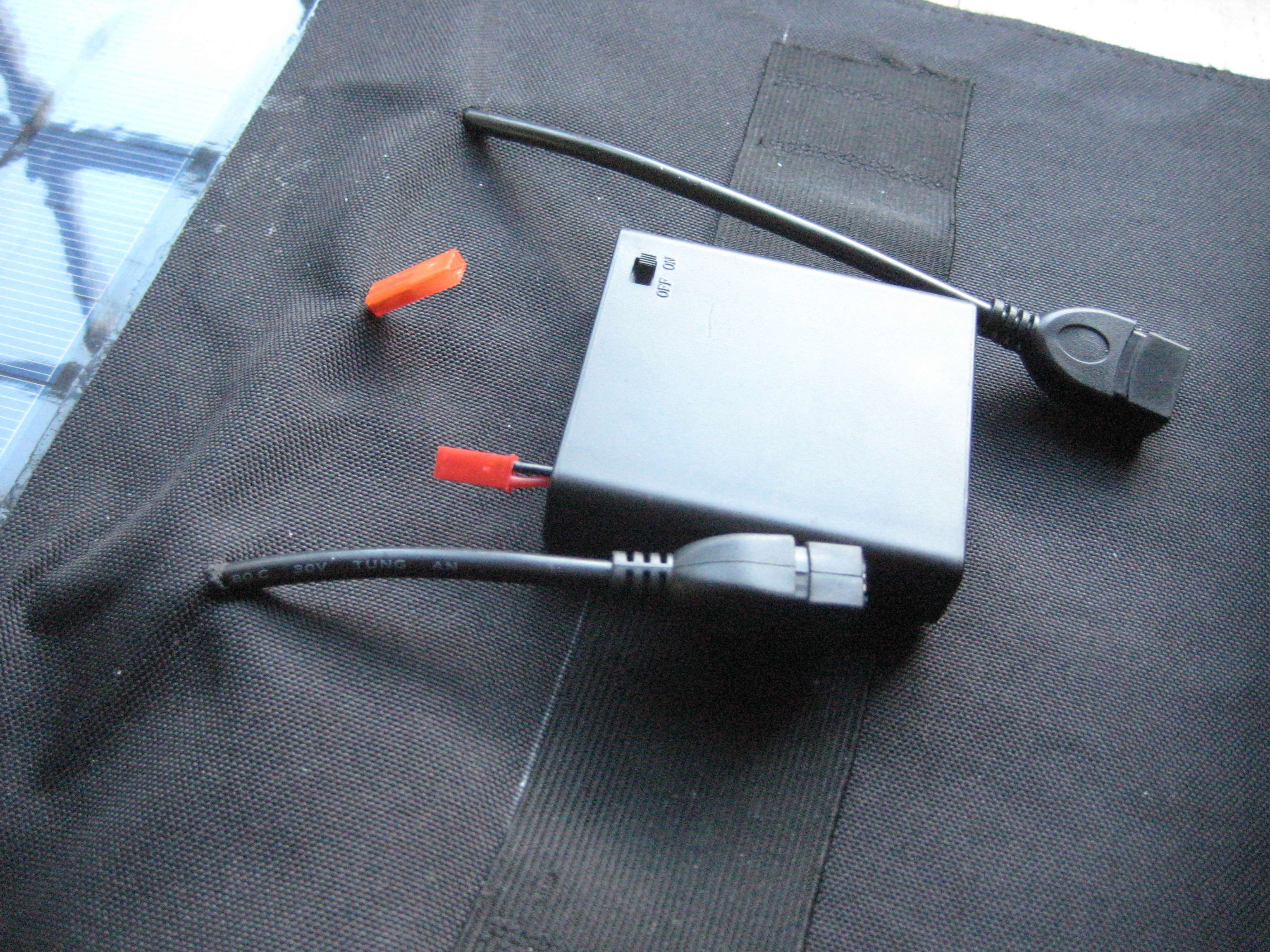 Starting with a new Executive Solar Folder. With some improvements. This will be a nice deep red. This is the first stage: 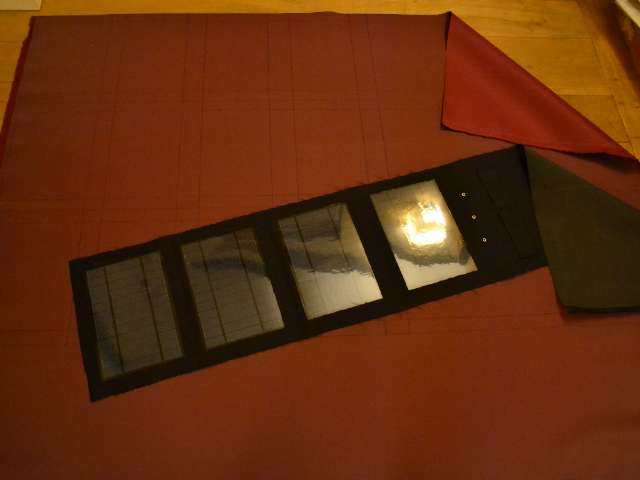 Solar Folder is pretty much complete. I'll be using this as a template, and have enough material to maybe make 10 or 20 of these depending on whether they need to have 2 or 4 panels. 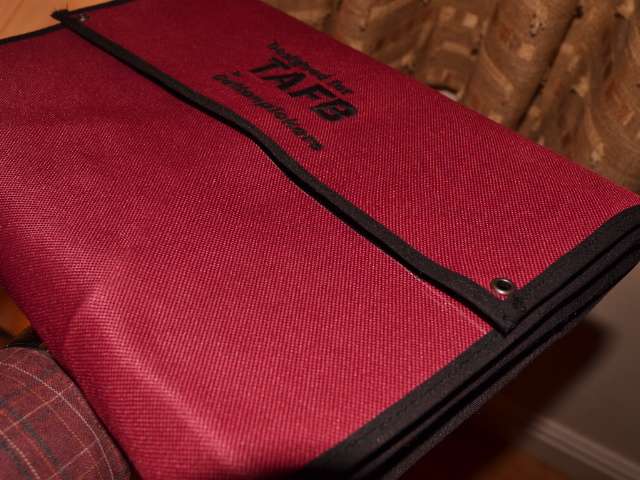 I used to use 'one piece' eyelets using one of these:

but it crushes the sides of the eyelets a little, so I've now moved on to a more robust 2 piece eyelet using a heavier duty machine like this: which is much better

This is a two piece design, and holds the fabric amazingly well. I'd highly recommend it. Nice thing is that you can also switch in smaller and larger eyelets. Both the black and the silver colour eyelets I'm using are rustproof. I'm using 4mm around the edge, and 5mm for the USB lead exit point.

I'm thinking of making a 6 or maybe 8 panel folding solar solution, as well as perhaps getting some larger panels made. I think that I can add 50% solar energy with just an inch larger panel - just need to decide which way to go.. more panels? or slightly bigger panels??? thoughts anyone?
Top 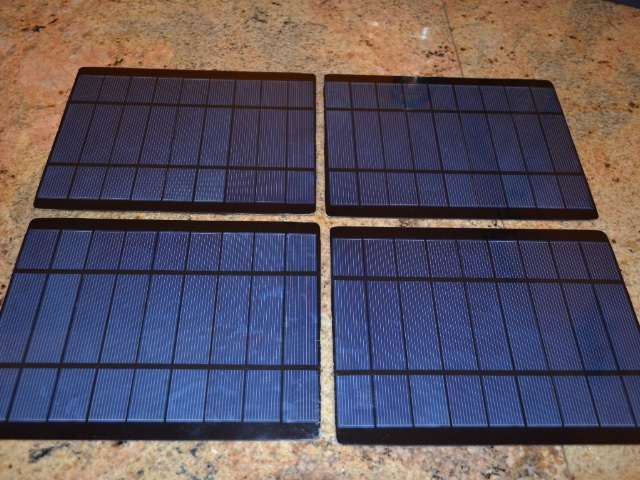 This weekend I'm finalising a 'New' Solar USB charger. This will be a 500ma unit - so will offer very similar charging to a PC port in good sun in a compact package and capable of strapping to a rucksack, tent etc. I'll offer an optional storage bag for it, which can double as a place to pop you phone in whilst its charging. Pics to follow...
Top
Post Reply
43 posts

Users browsing this forum: No registered users and 1 guest